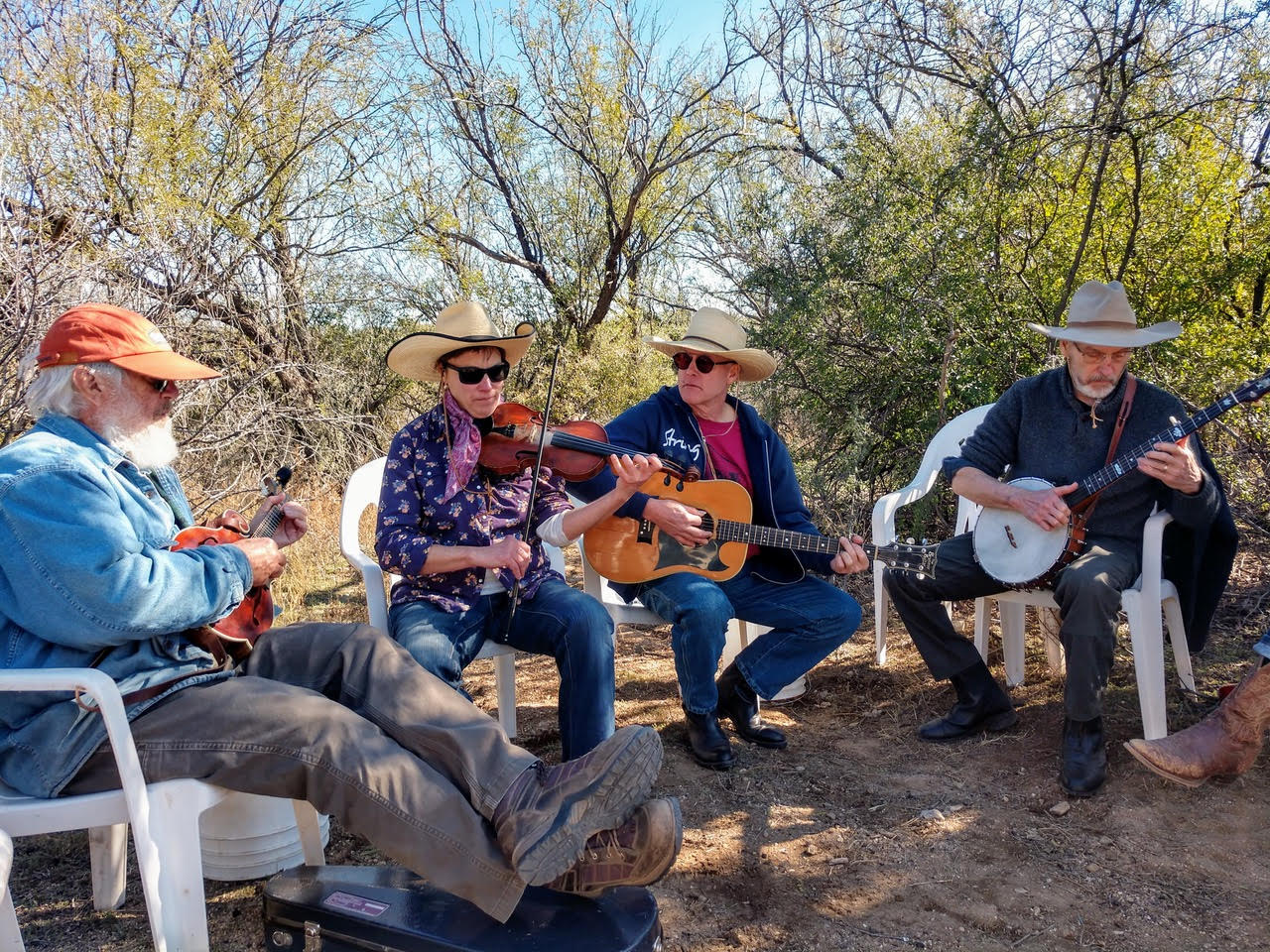 ENTHUSIASTS OF ALL LEVELS ARE WELCOME TO JOIN IN – BRING YOUR INSTRUMENT! SMALL GROUP OR INDIVIDUAL LESSONS TAKE PLACE MOST AFTERNOONS. THE JAM SESSION AFTER SUPPER WILL BE REPLACED WITH SMALL GROUP ENSEMBLES SHARING TUNES.

Since 2016 the Elkhorn Ranch has hosted a week in January inspired by the tradition of old time music where friends gather with their fiddles, guitars, banjos, mandolins, spoons for rhythm and the like around the fire, on the porch, or in the long house to make music together.

Our goal at the Elkhorn is to create a welcoming and relaxed space where you can enjoy a common interest or passion (for when you’re not riding or hiking). If you’ve ever dreamed of playing music with other people, this is a low-key friendly opportunity to give it a whirl!

If the weather doesn’t cooperate, we hope everyone will appreciate the camaraderie and friendship that are the heart and soul of playing music and being together here at Elkhorn!

Sandol Astrausky is an old time fiddler from Rhode Island who teaches fiddle music, plays for dances, attends festivals, and is active in the old time music community. In addition to giving afternoon lessons, she leads the evening jam sessions at the Elkhorn by shuffling us in and driving the tunes with her melodies.

Rory MacLeod teaches and plays many stringed instruments including the double bass, guitar, and banjo and is active in the old time music community. Rory adds his joyful singing to many of our tunes and gets all of us involved in enjoying the moment together.

Bill Burke is a luthier in Flagstaff Arizona who builds exquisite instruments – many of them being traditional old time instruments. He also plays the guitar, banjo, mandolin, and mandola which he gives lessons on here at the Elkhorn. To see some of his instruments and hear him play, follow this link to his website old timey music.

People play a wide variety of instruments in old-time music sessions and each instrument has one or more roles in the structure.

Fiddle: The fiddler plays the melody and sets the tempo and the fiddler shuffles the band in, sets the tempo, and signals to the band when to stop. Check out this fun fiddlesticks video to see old time played and danced with just a fiddle and some rhythmic accompaniment.

Banjo: The banjoist plays a lower version of the melody and rhythmic accompaniment typically in the clawhammer style.

Guitar: The guitarist plays rhythmic accompaniment to the melody.

Bass: The bassist creates balance through adding a lower register and rhythmic accompaniment.

Old-time tunes vary greatly in rhythm and style depending on the purpose of the jam, the region the band is from, and the type of dance typical to that region. See this example of two stepping to understand how the music and dance works together

Breakdown: A breakdown can mean a wide array of up-beat old time tunes used for many dance styles. It may have a heavier beat than a reel but the term is used pretty interchangeably with the term reel. Breakdowns are played in 2/4 and 4/4 time. Example Follow this link to read a forum on breakdown style

Reel: A reel is a Scottish dance tune that spread to the British Isles and North America. It is played in 2/2 or 4/4 time.

Waltz: A waltz is a traditional German folk dance that is played in 3 /4 time

Jig: A jig is a traditional Irish dancing tune that is not played often in American Old Time music but can sometimes accompany clogging. It is played in in 6/8 time

Schottische: A schottische is a bohemian dance tune that spread to Europe and the United States. It is traditionally played as a slow polka but is usually played in 4/4 time breakdown style in Old Time.

Here are examples of how playing tunes in different styles alters how it sounds: Slow polka / Breakdown